We will be closed for Thanksgiving! Enjoy the Holiday! We will see you on November 29th.

Doug Thayer is a local in Westfield, MA who lives just across the street from Hometown Structures. Doug and his wife have always wanted a dream backyard in which the family could unwind and relax. He and his wife decided to get an underground pool for their backyard since they’ve always wanted one. After Doug had his pool installed, he wanted to continue upgrading his backyard, It was until one day when Doug drove past the Hometown Structures lot and had seen a 24×24 pavilion with which he fell in love. One day, Doug went into the sales office at Hometown Structures and purchased the pavilion.

Soon after he had purchased the 24×24 pavilion, Doug had also purchased a barn and pool house along with it. He now had a space to shade under the sun and spend time with family and friends, but also a barn in which he could use for storage and other party activities as well. After a while, Doug had determined that all three of these large structures would not be able to fit in the backyard due to local zoning restrictions. He had to improvise and with the help of Hometown Structures, Doug was able to split his barn into two sheds and swapped the large 24×24 pavilion for two smaller pavilions.

On delivery day, Doug couldn’t have been more excited. He would be receiving his final pieces to complete his dream backyard area. Doug loved the fact that Hometown Structures had brought the storage sheds and pavilions to his house and assembled and installed them.

He found it really fascinating how the Hometown Structures team was able to maneuver and deliver the sheds and pavilions throughout the yard.

What are Doug’s Dream Backyard Structures Used For?

So just as any other shed, Doug had to have one for storage and work supplies. The other shed is used for fun or party activities.

Doug calls shed 1, the fun shed. He utilizes that shed for activities such as a food serving so that people can walk through the shed, pick out their food, and exit right through the front doors. He says that all of his guests prefer shed 1 over 2, and there’s no surprise why. Shed 2 is used for standard shed purposes including storing lawn care equipment, tools, etc.

Shortly after building the underground pool, Doug has in his backyard, he wanted a space where guests could come over, have a space to change, shade themselves in, before going into the pool, this space became the pool house. The pool house is a key component of this dream backyard space Doug has built and it’s easy to see why.

His most recent addition to the dream backyard in Massachusetts was the barbecue pavilion. Before buying this pavilion, Doug loved grilling outdoors with friends and family but did not like being in the sun the whole time. After some talks with his wife, he went ahead and purchased the pavilion from Hometown Structures. Now, Doug can enjoy his peaceful and tasty backyard grill-out sessions with his family and friends while having a nice, shaded space to relax and converse.

The final piece Hometown Structures had installed for Doug in his dream backyard was the hot tub pavilion. Doug loves spending time in the hot tub relaxing and watching the St. Louis Blues while doing so. Doug wanted to take his relaxation even further than it was, and what better way than a pavilion shading your hot tub session?

What Do Others Think of Doug’s Dream Backyard?

Doug loves to have people over, especially on Sundays in which he calls it “Sunday Funday.” He gets constant positive feedback regarding all the structures in his dream backyard. He said that many people joke around and say how they prefer shed 1 and can’t stand shed 2 because it is the shed for work.

Doug is extremely satisfied with the structures in his dream backyard. He now has a space to host parties, relax, and spend time with family and friends.

Thank you Doug for the opportunity to be part of your dream backyard makeover – it looks amazing. I wish you many good memories made there entertaining family and friends. Enjoy! – Andrew Kurtz 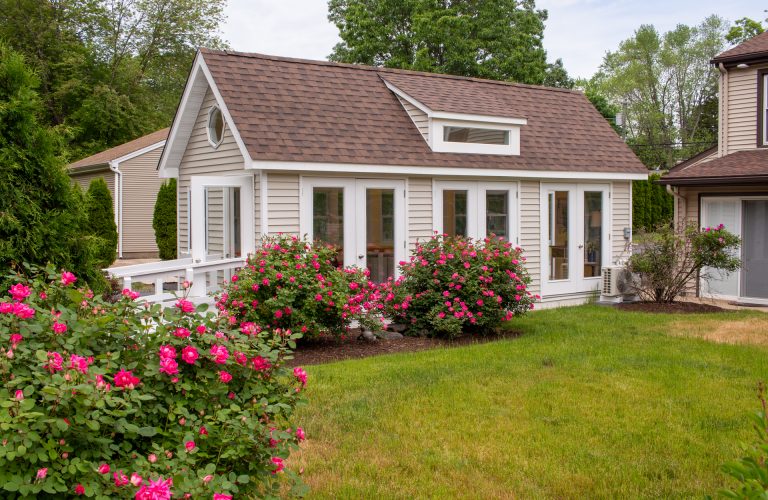 Shady Oaks Assisted Living Center in Bristol, CT was in need of a new Portable Building to allow for resident & family visitations during the novel Coronavirus pandemic of 2020. After some research, Tyson (owner of Shady Oaks) stumbled upon Hometown Structures and the rest is history.

Today is the day to get the backyard you’ve always dreamed of.

Request A Catalog NEW! Design A Shed in 3D